How to Say No Without a Child Tantrum 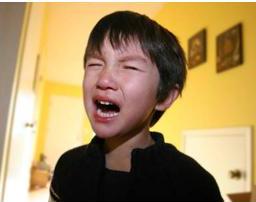 Learning how to say "No" without a child tantrum or aggressive behavior in children of all ages can be challenging and frustrating. Handling temper tantrums in toddlers is not easy, but they are even worse if they continue when children get older. The biggest mistake I see parents make is to give an item or allow an activity after you have said no and they throw a fit. What did they just learn? That throwing a temper tantrum gets what he or she wants. So you can't really even blame them for their behavior as doesn't it make sense to do what works to get what you want?

I understand that it can be very difficult as a parent not to give in when they are behaving terribly and you just want it to stop. Some parents also feel bad when their children have Down Syndrome or autism and may justify giving in due to this. However, this sort of behavior can only get worse and when your child is a teenager, which some of you may already be to this point, he or she will increase the severity and intensity of the behavior to the point where you either give in or deal with serious consequences.

At that point little toddler temper tantrums from a two-year-old will seem like small potatoes. You'll wish to go back in time at that point! Not to mention, that dealing with this day after day is not the kind of life most people want to live. It is much easier to follow through with a little 2-year-old than a much bigger and stronger 14-year-old that has had 12 years of learning what works to get what he or she wants.

I have worked with parents that walk on egg shells and are afraid of their own children. Therefore, I am excited to provide some strategies that will help you to follow through, even with aggressive behavior in children. However, this will still require effort on your part. It will be much easier if you start this right during the terrible two stages, when they are learning, but even if you are only learning this information now for your 14-year-old, it should still help.

Be sure to also check out my free eBook and other pages with more child behavior help.

How to say "No" without a child tantrum

Avoid saying "No," and tell them what they CAN have instead.

For example, if they want juice or pop and your child can’t have any, but your child can have water only say, "You can have water." He or she asks again and you say, "You can have water." Then continue to get the water and hand it to them and walk away ignoring all other behavior. You may even put a small amount of juice into the water to fade the juice out more and more. I personally love using Sweet leaf Berry Stevia in water, which adds some natural flavor without the sugar. (affiliate disclosure)

Choices are even better. If it is possible for him/her to have a choice of two approved options, then you would say, "You can have milk or water." If they will not choose one of those options after 5 seconds or ask for something different, choose for them. "Okay, I guess you can have water then." Get it for them and again walk away.

Don’t engage in an argument about the subject. Say, "I love you too much to argue about this." And walk away. Walking away is your best defense with an older child.

When you are tired, stressed or vulnerable, just say "Yes" right away as long as it isn’t something unsafe or impossible to have/do.

If you know that you are in a position where you will not be able to follow through after a child tantrum when you say no, just say yes in the first place. Why say no, have him or her throw a fit to where you end up saying yes anyways and the only thing you accomplished was teaching them that when you say no it doesn’t matter. Then be sure to follow the next tip.

Practice saying "No" and following through when in circumstances you are absolutely positive you will follow through.

For example, we used to have a DVD player in our car for our son to watch on long trips to visit family. We don’t like letting him watch it unless the trip is longer than one hour. However, when we first got it, he wanted to watch it all the time. If we said no he would throw a horrible child tantrum (at 2-years-old). We knew if we gave in, that we would reinforce his behavior, so the first time we had to endure a tantrum for 30 minutes (of course we did not give in, BUT it was miserable).

Driving during a child tantrum is awful! So, we decided to start with a rule for trips less than 10 minutes, knowing that we could endure a 10 minute tantrum. After successfully saying no without a tantrum, we were able to put the original rule of DVD’s only for trips longer than one hour back into place.

If you are always enduring a child tantrum in effort to get the same thing, such as a donut or to play a certain video game, don’t bring donuts into your home and pack away the video game until he or she begins to better accept not always getting what he or she wants. Sometimes the toy is too strong of a reinforcer to work on adaptive skills, such as waiting or accepting no.

Parents may also endure a child tantrum when children don’t want to do something, are asked to change or stop an activity they don’t want to, and in order to get attention. You may find more ways to deal with a child tantrum with regard to these areas helpful as well. Implementing strategies that help with transitions, such as picture schedules is a great way to avoid them in those situations.