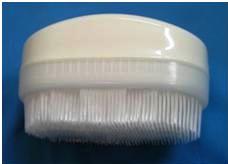 Learning why and how to use the Wilbarger brushing protocol, can be an important part of child's sensory diet. This is a technique used in occupational therapy for children to address symptoms of sensory processing disorder (SPD), such as sensory seeking and defensiveness. As a treatment option for SPD that provides internal organization with tactile and proprioceptive stimuli, the technique is typically used on children with sensory modulation disorder, which. is a sub category of SPD. It can also be used for kids with autism or ADHD given there is a sensory component to their symptoms.

The program needs to be supervised by an occupational therapist that is experienced in using the protocol. It is very intensive and requires the family to administer the procedure every 90 minutes-2 hours during waking hours, for at least one week.

Time between sessions may not be less than 90 minutes or they may overload the nervous system. Any more than two hours between sessions decreases the desired effect. After one week the therapist will be able to re-evaluate whether the child would benefit from further sessions.

Each session starts with the use of a special sensory brush that is used to provide moderate pressure along each arm length, the back, and then each leg. After the brush strokes are completed, a series of joint compressions are applied to the child. Some children will absolutely love this and others may be more hesitant depending on the subtype of sensory modulation disorder they have. The brushing is followed by joint compressions that helps for the desired effect to last until the next brushing session. The effect it can have on calming and reorganizing the nervous system

Some families report amazing results with the Wilbarger Brushing Protocol eliminating sleep problems and an increase in verbal communication. Sometimes it is hard to believe that such a simple technique would help to organize the nervous system. However, after experiencing one session of the Wilbarger Brushing Protocol myself, I am pleased to report it had a very nice calming effect. I can only imagine what multiple sessions will do!

After doing this with our son when he was approximately 3 years old, we found that it helped his sleep patterns immensely and made him more calm. Being a sensory seeker he is frequently running around and talking nonstop. This technique did a great job of decreasing this type of behavior.

We actually had thought he may have autism, but I knew it had to be something different because he was SO social and engaged with others. He just couldn't focus or sit still. Eye contact was hard simply because he was so distracted by everything around him sensory wise.

Some additional pages you may find helpful: