Learn how to identify symptoms of sensory modulation disorder, such as sensory seeking, which may often be confused with signs of ADHD. Although signs of a sensory disorder are usually considered to be one of the most common characteristics for autism, it may occur by itself, coexist with ADHD symptoms in children or get misdiagnosed as one of these disorders.

Sensory Modulation Disorder is a category of Sensory Processing Disorder (SPD) and the most commonly diagnosed form of SPD. When a child has poor modulation, his/her responses may be overreactive leading to sensory defensiveness, underreactive, sensory seeking or fluctuate between these.

A difficulty with sensory modulation refers to how a child regulates his/her responses to sensations. Other categories of SPD include Sensory Discrimination Disorder and Sensory-Based Motor Disorders. 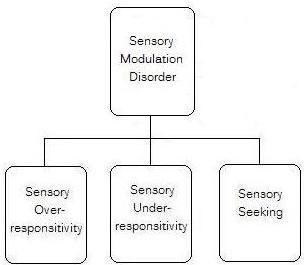 Sensory Modulation Disorder is suspected when a child shows symptoms with frequency, intensity, and duration. This means that the symptoms or unusual behaviors occur several times a day, with fixed avoidance or fierce efforts to contact environmental stimuli, and lasts several minutes or longer.

You may notice your child hates to wear certain types of clothing, refuses foods of certain textures, avoids activities, such as swinging or does not like to have others touch him/her.

Another child with modulation difficulties may not notice being touched or moved, may engage in more sedentary play activities, and often not notice sounds or visual objects that are obvious to others.

You may also have a child that craves running, jumping, rough play, bright lights, loud music, and still put inedible objects in his/her mouth well past the age of 2-years-old. This particular subtype of SPD is one that can often be confused with signs of ADHD or possibly even symptoms of mild autism.

For children that are sensory seeking with modulation challenges mainly in the vestibular sense, there may be a delay in toddler speech development, which is also considered to be one of the most common autism symptoms. This was the case for my son, who was diagnosed with SPD shortly after turning three.

After doing the wilbarger brushing protocol with him and weeks of daily therapeutic listening sessions, his speech has become much more articulate, functional, and complex.

Initially, he often would speak in some type of gibberish language. He certainly loved to talk, but we couldn't understand him! Now he is saying things on a regular basis that blow us both away.

When a child has problems with modulation, the brain cannot properly interpret environmental stimuli and as a result the brain becomes disorganized. The child's behavior will also be disorganized as well. Many behaviors associated are the child’s way of attempting to organize environmental stimuli, such as running in circles, jumping or other "hyperactive behaviors."

Ignoring the problem will only make it worse. A child with sensory processing disorder and modulation difficulties needs understanding and help. Refusing to participate or inability to focus in certain activities is not always because he/she won’t, but simply because he/she can’t.

SPD treatment usually includes occupational therapy for children (OT). Seeking help from an OT that has direct experience with sensory disorders is the best way to get the help your child needs.