Does Your Child Have
a Problem Sleeping?

Learn some of the best ways to deal with children that have a problem sleeping and determine the recommended hours of total sleep for every age. As mentioned in my eBook, deprivation of this extremely important need can lead to developing attention difficulties, frequent illness, hyperactivity, impulsivity, developmental delays, and behavioral problems. Not to mention, the psychological effects it will have on you as a parent! When my oldest son was an infant, I thought I was going to hallucinate and go crazy if I didn't get more rest at night!

After learning and applying these techniques, my son was not only snoozing through the night, but also taking naps for 2-3 hours during the day! It was HEAVEN after we could barely get him to close his eyes for a 20 minute nap previously, so we are living proof that these techniques WILL work if you apply them consistently.

For some children with ADHD behavior problems, simply focusing on getting them to meet the recommended hours will often relieve a lot of the behavioral issues as well. My son would literally run around in circles acting like he was the energizer bunny. Then I learned that this was due to a heightened amount of cortisol his body was releasing because of his problem sleeping and the stress endured from not getting enough shut eye.

The national sleep foundation recommends the following number of total hours of sleep per day including naps by age group: 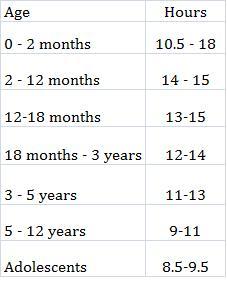 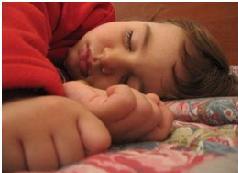 One common belief is that there is a problem sleeping because of the hyperactivity, delay, or behavioral problems. However, it is difficult to determine whether these difficulties getting the recommended amount of rest may actually be the cause of overactivity, delays and behavior problems instead of vice versa.

Difficulties falling and staying asleep are more common for someone that has sensory processing disorder because of an inability to calm the nervous system. Individuals with this disorder may continue to feel sensory stimulations from simple activities long after the activity has stopped. This is similar to when you still feel like you are on a boat or an amusement park ride hours later after you have already gone home.

Recommendations for children with a problem sleeping

The following tips account for environmental factors that can disturb sleep patterns, cause hyperactivity, attention difficulties and a behavioral issues. By limiting these triggers, the brain can be more easily calmed for nighttime slumber and the challenging conduct can be eliminated.

The practices outlined must be used consistently for at least 2-3 weeks for an individual that has a problem sleeping. Unfortunately, because it can take 2-3 weeks of consistent use before seeing results, many parents give up. However, it is extremely important to stick with it as getting deep sleep is absolutely necessary to brain function and development. When children have a problem sleeping and do not get the recommended amount  each day our bodies simply cannot function as they should. Just think of how you feel when you are deprived of nighttime slumber... Could you imagine trying to learn a foreign language after a night of interrupted zzzz's? It's the same for kids! Not to mention the irritability felt from lack of high quality slumber.

You may also want to strongly consider looking at symptoms of sensory disorders to see if this may be an underlying cause. One treatment for this disorder, called the Wilbarger Brushing Protocol, has reportedly had a positive effect on helping kids fall asleep at night. This is one of the techniques we used for our son and he started doing much better after we implemented this protocol along with a sensory diet. The following are intended to be used in combination with each other to see the best results.

• Limit caffeine and sugar.
Caffeine can stay in the body up to 12 hours, so even if a child is drinking caffeine around 4 p.m. it may still influencing one's ability to calm down.

Being that chocolate milk has caffeine, drinking this for dinner is discouraged. Sugar is also in almost everything we eat, so accounting for all sugar consumption and ensuring that it is within the recommended daily amounts, eliminates this as a contributing factor for an individual with a problem sleeping.

• You may consider using a homeopathic sleep aid for kids. I have personally used this particular one with my son and found it to work well. It is especially great for those nights when they wake up and won't go back to bed because you can give it every 15 minutes until symptoms are resolved.

• Limit television, video games, and computers in the evening, not allowing any at least one hour prior to bedtime.
Artificial light disturbs the body’s natural ability to release melatonin (a hormone that aids rest at night). A study reported in pediatrics shows that children watching as little as two hours of television a day had a problem sleeping, including bedtime refusals, difficulties falling and staying asleep, and daytime sleepiness.

• Do not allow TV in the bedroom.
This common practice is also linked to sleeping difficulties, especially if they claim to need it. Any talking or sounds can be interrupting throughout the night, forcing the brain to remain slightly awake in effort to try and process the information. White noise machines are the best option for eliminating this concern (see below).

This is also a bad habit that should be broken as soon as possible. You may need to ween them off the TV initially if this is the case, but ultimately getting the TV out of the bedroom is in their best interest.

• Dim lights around the house approximately one hour prior to bedtime.


• Get a white noise machine for the bedroom (Fan, Air purifier or Ocean CD work well also) and darkened blinds. This helps to keep light and noise out of the room, especially during naps or in the summer when the days are longer. Even the slightest noises can disturb sleeping patterns.

I love the lullaby soundspa machine! It has a rotating projector with three disks of different pictures of fish, moon/stars, and birds that shine on the ceiling, as well as music or the sound of rain to use as white noise. This is a great alternative to TV for children that need something to watch while falling asleep.


• Develop a bedtime routine.
Do this routine consistently in the same order at bedtime and a shorter similar routine for nap times. You may consider using a picture schedule to help them know what the routine will be each night.

• Bedtime should be earlier in the evening
This is to ensure they are able to get the number of recommended hours during the night based on his/her typical wake up time.

• Use daily behavior charts to reinforce behaviors, such as staying in bed and going to bed immediately following a routine without any arguments.

• It is highly recommended that children aged 2-5 years old have a bedtime of 7:30 or 8:00 p.m.
Later bedtimes often result in being overtired. When the body is overtired, which often happens when there is a problem sleeping, it releases cortisol as a way to deal with the stress of fatigue.

Cortisol, as mentioned, is a corticosteroid hormone, which results in the wired state you may notice from time to time, AKA “the second wind.” It also can cause another problem, such as attention and memory difficulties, impulsivity, hyperactivity and weight gain, when the body releases it too frequently.

Some parents say that their children just aren’t tired around 8:30 and are running all over the house with tons of energy, so they end up putting them to bed around 9:30 or 10:00 when their body crashes. This can result in poor quality rest, night waking and limited hours of slumber. Quality is just as important as quantity of sleep!

• Allow children to learn to fall asleep by themselves.
If your son or daughter has a problem sleeping through the night and he or she does not know how to fall asleep by him or herself, you will always need to get up and aid in helping him/her fall back asleep.

Whatever is used to help them initially will be necessary to also help them after waking up at night. One drug free method is to place a cold pack or cold spa neck wrap on the back of the neck 15 minutes prior to bedtime. This causes the body to naturally release the hormone melatonin.

As an infant my son had a terrible problem sleeping until he was about 8 months old. After reading and applying the methods in the book Healthy Sleep Habits, Happy Child by Marc Weissbluth M.D, my son finally began sleeping through the night (until we had some issues arise around 2 years old at which time we implemented a sensory diet). This book was my savior when my son was an infant. I highly recommend all parents reading it.

He provides great additional insight on how to teach your child to fall asleep on his or her own, specific times during the day they should be napping according to the body’s natural circadian rhythms, instructions regarding specific concerns along with other very helpful information.