Immunizations and Autism: Are Vaccines the Cause? 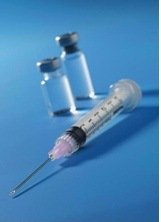 Finding the best information on immunizations and autism can be challenging with conflicting information all over the intverntion. There are so many different theories involving the role vaccinations may play in the rising epidemic of autistic disorder, it can be hard to know what's accurate. I’m not here to make a decision for you, but to hopefully give you some of the information you need as well as good resources to make one yourself.

If you haven’t read the additional pages I’ve written on this controversial topic, I highly recommend you start with my page Are vaccines causing autism? first before reading on...

One theory about the connection with immunizations and autism is related to children that have an undiagnosed mitochondrial disease. A federal vaccine court case in March 2008 stated that the child’s undetected mitochondrial disorder predisposed her to autism-like symptoms after she received nine immunizations in one day. This would be another predisposing factor, such as a genetic inability to detoxify well, that when combined with immunizations, potentially resulted in symptoms on the spectrum. Mitochondrial disease is long-term, genetic and usually inherited. It occurs when mitochondria fail to produce enough energy for the body to function properly. This occurs in one out of 5,000 individuals.

Possible Side Effects Related to
Immunizations and Autism

Despite all of the reported possible side effects and the federal court case, current studies seem to consistently report vaccines do not cause autism and are safe. The most recent of these was conducted by the National Vaccine Program listed in an article titled Report: Vaccines are Safe, Hazards Few and Far Between. Yet despite this title, the article goes on to report the convincing evidence for 14 health problems, including seizures and brain inflammation.

The article also quotes Clayton, who directs the Center for Biomedical Ethics and Society at Vanderbilt University, stating that when it comes to vaccines and autism, it's impossible for this committee, or any other scientific committee, to prove there's not a link. However, I think the question many might ask is, "How do you know that brain inflammation didn't cause the autism?"

One of the challenges to knowing the real risks involved with immunizations and autism is that doctors are essentially not allowed to discourage their use and don’t always know all the facts. In fact, I found that a local pediatrician had no idea that ‘severe permanent brain damage’ was a possible side effect. The exact words were – “Do you remember which vaccine it was?”

Then comes the question about the Amish. Where are all of the Amish children with autism? The article The Age of Autism: The Amish Anomaly written by Dan Olmstead explores this and other questions in his attempt to find what should have been over 100 individuals diagnosed, based on current prevalence, in a Pennsylvania Amish community. He found three individuals, yep that’s it.

If you are not aware of Amish culture, they typically do not believe in vaccinating. However, a mother reported that younger Amish are getting their children vaccinated more and more. When interviewing about two of those individuals diagnosed, Dan found that both had been vaccinated. The third was unknown.

Besides this anomaly and what appear to be other obvious correlations between vaccinations, autism research seems to continuously prove otherwise. So, why don’t parents believe the research? Perhaps because statements made to the media seem to constantly contradict this so-called research.

Such as when the US Health Resources Services Administration (HRSA) made a statement to CBS about immunizations and autism that said..."We have compensated cases in which children exhibited an encephalopathy, or general brain disease. Encephalopathy may be accompanied by a medical progression of an array of symptoms including autistic behavior, autism, or seizures.”

Maybe it’s because a central figurine in CDC vaccine safety studies was investigated for fraud in 2010 due to falsifying documents and e-mails showing CDC officials intent on fraudulently cherry picking facts to prove vaccine safety as reported by Natural News. Either way it seems that parents have a right to continue questioning whether immunizations are safe or not.