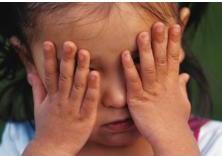 Learn the most common signs of childhood disintegrative disorder, one of the five pervasive developmental disorders, which can often be confused with characteristics for autism.

Although both are characterized by a lack of social skills, verbal and nonverbal behavior, and repetitive or stereotypical behavior, impairment does not appear until at least 2 years of age and no later than 10 years of age after what seemed to be completely normal development in all of these areas<span style='font-size: 50%'>(1).

Childhood disintegrative disorder is typically associated with severe developmental disabilities and has also been associated with Tuberous sclerosis (benign brain tumors), lipid storage diseases, (toxic buildup of excess fats (lipids) in the brain and nervous system), and subacute sclerosing panencephalitis (chronic infection of the brain caused by a form of the measles virus that results in brain inflammation and the death of nerve cells).

Its onset is usually between 3 and 4 years of age, but can occur even as late as 5 years of age as well. The more delayed onset, the more important it is to thoroughly examine any possible medical causes for this disorder. Onset may be abrupt and insidious with precursors of increased activity levels, irritability, and anxiety followed by a loss of speech and other skills.

Despite comprehensive evaluations of children diagnosed, there are no known causes. However, it is suspected that there may be a genetic basis. The idea is that an abnormal gene is triggered during the early stages of development that contributes to the regression.

Other theories include environmental exposures, such as toxins possibly even those found in vaccinations or an infection, an autoimmune response that causes the body’s immune system to attack part of the brain, or possibly even epilepsy as this is a common feature in children diagnosed. It is also possible that the causes for this disorder are correlated or similar to autism causes.

A. Apparently normal development for at least the first 2 years after birth as manifested by the presence of age-appropriate verbal and nonverbal communication, social relationships, play, and adaptive behavior.

B. Clinically significant loss of previously acquired skills (before age 10 years) in at least two of the following areas:

C. Abnormalities of functioning in at least two of the following areas:

(1) Qualitative impairment in social interaction (e.g., impairment in nonverbal behaviors, failure to develop peer relationships, lack of social or emotional reciprocity).
(2) Qualitative impairments in communication (e.g., delay or lack of spoken language, inability to initiate or sustain a conversation, stereotyped and repetitive use of language, lack of varied make-believe play).
(3) Restricted, repetitive, and stereotyped patterns of behavior, interests, and activities, including motor stereotypes and mannerisms.

D. The disturbance is not better accounted for by another specific Pervasive Developmental Disorder or by Schizophrenia.

Autism treatments are generally used in the treatment of this disorder as well. This may include: