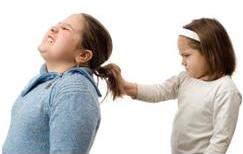 Learn the best ways to prevent and respond to child aggression as well as free activities to work on anger management in a child. Prevention to aggressive behavior in children starts by helping your child identify common triggers and learning to avoid non-verbal behaviors that can often lead to agitation. Once you know when aggression is most likely to occur, you can practice anger management in children regularly and possibly even do role play for the situations you have identified as triggering aggressive behavior.

Many children have meltdowns, temper tantrums and aggression whenever unable to do a desirable activity, have a desirable item, when asked to do something they don’t want to do, or when changing activities – transitions. The following pages offer great ideas for helping to prevent anger, child aggression, meltdowns and temper tantrums when:

2. Asked to do something – defiant children

In addition to these strategies you will want to identify what are other common triggers or things that you notice precede aggressive behavior in children you are working with or your own child. If he or she becomes easily frustrated when trying to learn a new skill or when putting together a difficult puzzle, you would identify this as a trigger for your child’s aggression. There also may be some triggers for aggressive behavior in children that include things such as loud noises, crowded rooms, and physical touch, common for some children with characteristics of autism.

Once these triggers are recognized, be sure to create a list of them for all individuals to read and be aware of when working with the child. This will help to minimize aggressive incidents due to someone merely not “knowing” that your child does not like to have his or her head touched. It would also be a good idea to avoid triggers as much as possible, until an aggressive child has established strong coping skills and alternative replacement behaviors for aggression.

For triggers related to stimuli, such as loud noises, bright lights, and physical touch, a desensitization program or sensory integration therapy may be used to help the individual cope with the stimulus triggers. You may also want to review information related to sensory processing disorders.

Another way to identify common triggers is to self-monitor your own behavior as well as monitoring other caregivers, for things that may be triggers for the potentially aggressive children. Be aware of verbal and non-verbal body language that may cause child aggression.

Helping them practice the right way to work through their emotions during a common trigger is a great place to start. You may also want to learn the best way to respond to child aggression for those incidents that do occur.

Children are very perceptive to how a person projects oneself and even if what you are saying is not necessarily bad by itself, when accompanied by crossed arms, rolling eyes, and a loud sigh the words take a whole new meaning.

Children can be very sensitive to this type of non-verbal rejection and aggressive children usually respond negatively as a result.

If you haven't already, be sure to download my free eBook with the best tips and techniques for helping all children by clicking the image below!